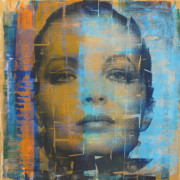 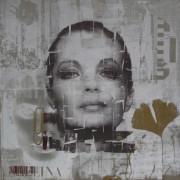 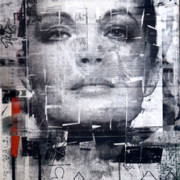 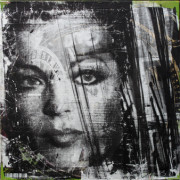 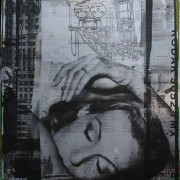 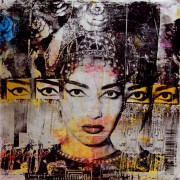 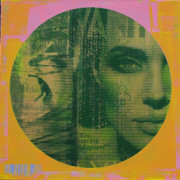 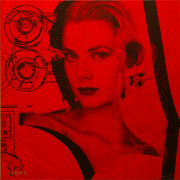 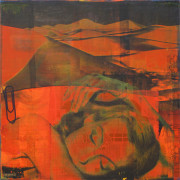 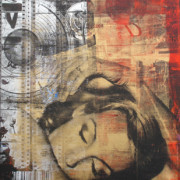 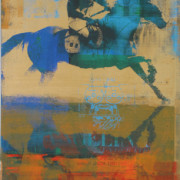 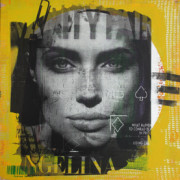 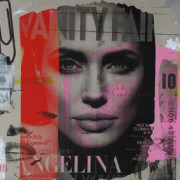 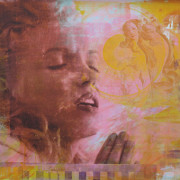 The artist Andreas Reimann specializes in further developments of pop art in tradition of Warhol portraits. His work includes portraits and hommages, dedicated to icons of the 20th century such as ROMY SCHNEIDER and MARLENE DIETRICH.

His technique evolved from classic painting more and more into a mixed media creation with the usage of silk screening as a major part. However he is far away from doing Warhol copies. Where Warhol counts on statics, Reimann works with dynamics. Warhol goes back to byzantine icon-painting, where the image is the image and nothing else, in contrast, Reimann is at home in the tradition of mannerism, he produces multi-layered works, with refined hidden details, he creates illusion and even reversed sense.

Reimann portrayed some of stars of pop culture in his very own complex way: DAVID BOWIE, ELTON JOHN, TINA TURNER,…all have signed their portraits. Andreas Reimann creates documents of time, monuments of a time that gets faster every day. The turn of the millenium. If we can state one thing about our global culture then surely that superpop is back. Again, there are people who get hyped as icons and then, there are those who wish to be hyped. And this kind of pop is even more extensive and with a much broader effect than in the mid 60ies or in the early 80ies, the two heydays of superpop. since then the global culture has reached most parts of the world. As always it is about creating idols and selling them. And there, the art of Andreas Reimann is the perfect medium to integrate this strategy into an artistic context. That the artist himself becomes such an idol is implied.

These cookies are strictly necessary to provide you with services available through our website and to use some of its features.

Because these cookies are strictly necessary to deliver the website, refuseing them will have impact how our site functions. You always can block or delete cookies by changing your browser settings and force blocking all cookies on this website. But this will always prompt you to accept/refuse cookies when revisiting our site.

We fully respect if you want to refuse cookies but to avoid asking you again and again kindly allow us to store a cookie for that. You are free to opt out any time or opt in for other cookies to get a better experience. If you refuse cookies we will remove all set cookies in our domain.

We provide you with a list of stored cookies on your computer in our domain so you can check what we stored. Due to security reasons we are not able to show or modify cookies from other domains. You can check these in your browser security settings.

These cookies collect information that is used either in aggregate form to help us understand how our website is being used or how effective our marketing campaigns are, or to help us customize our website and application for you in order to enhance your experience.

If you do not want that we track your visist to our site you can disable tracking in your browser here:

We also use different external services like Google Webfonts, Google Maps, and external Video providers. Since these providers may collect personal data like your IP address we allow you to block them here. Please be aware that this might heavily reduce the functionality and appearance of our site. Changes will take effect once you reload the page.